These must-read books continue to thrill readers today, decades after they were first published. How many are on your bookshelf? 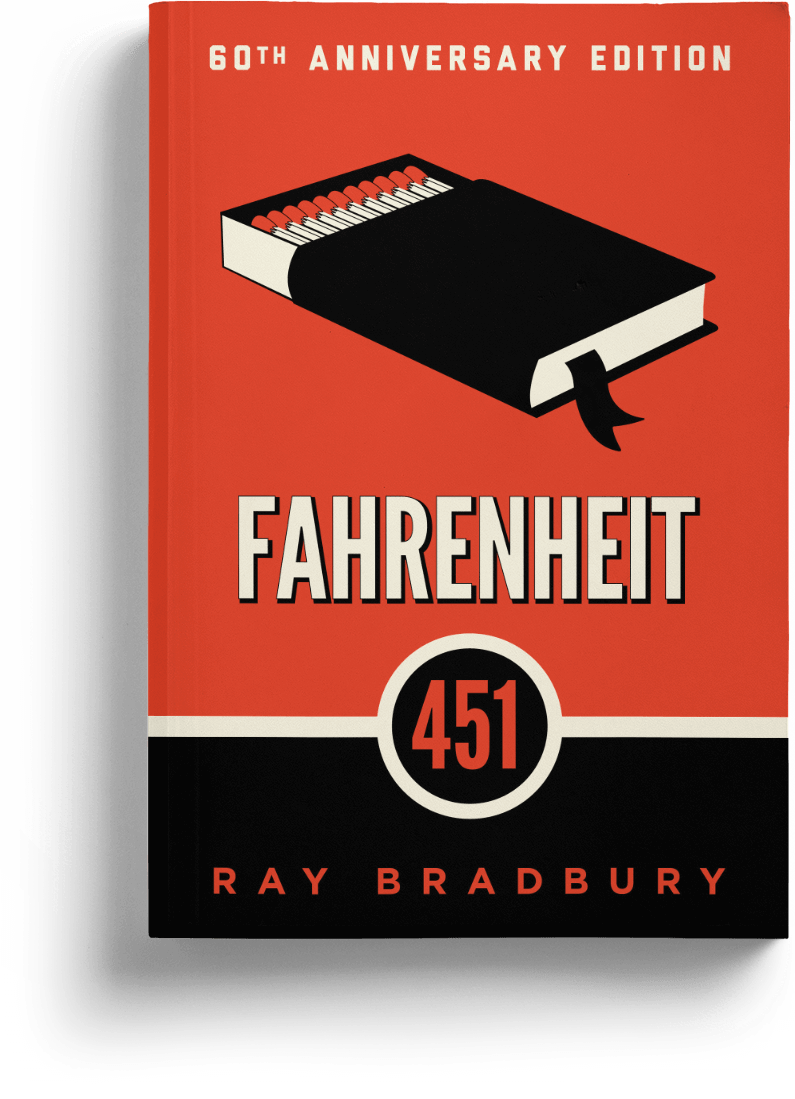 ‘It was a pleasure to see things eaten, to see things blackened and changed. With the brass nozzle in his fists, with the great python spitting its venomous kerosene upon the world, the blood pounded in his head, and his hands were the hands of some amazing conductor playing all the symphonies of blazing and burning to bring down the tatters and charcoal ruins of history.’

Firemen don’t put fires out in this world where books are forbidden—they set them. Guy Montag works tirelessly to incinerate any books hidden in people’s homes and the homes themselves until he meets young Clarisse, a solitary late-night pedestrian who is quietly nonconformist. In a society where most spend their lives in front of giant television screens as books are burned, she questions why. Montag’s suppressed doubts about their destruction come to the surface, and he decides to find and fight to preserve the hidden world of printed knowledge that still survives. Where are the Book People?

“With more than 5 million copies in print, this is a glorious American classic everyone should read: It’s life-changing if you read it as a teen, and still stunning when you reread it as an adult. Censorship is at the core of the novel, which is both a literary thriller and a dark meditation on the future of humanity.” —Boston Globe 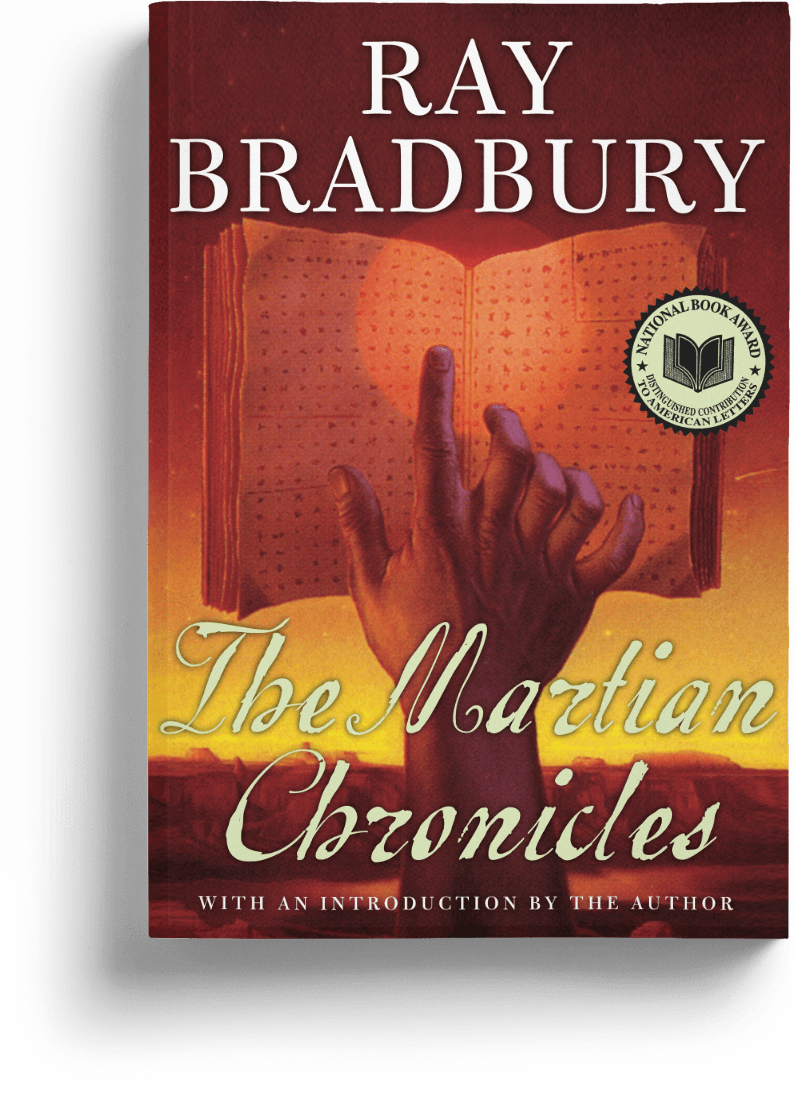 ‘One minute it was Ohio winter, with doors closed, windows locked, the panes blind with frost, icicles fringing every roof, children skiing on slopes, housewives lumbering like great black bears in their furs along the icy streets.

And then a long wave of warmth crossed the small town. A flooding sea of hot air; it seemed as if someone had left a bakery door open. The heat pulsed among the cottages and bushes and children. The icicles dropped, shattering, to melt.

The rocket made climates, and summer lay for a brief moment upon the land.’

These story-chapters form a pioneering saga of the next great frontier—the colonization of Mars—opening with a rocket’s flames heating up an Ohio winter in January 1999 and closing with a family fishing trip to Mars in October 2026. Earth’s explorers find great wonders on the planet, but they also encounter countless terrors. Successive waves of contact and settlement missions all but destroy the elusive Martians, until war on Earth pulls almost everyone home. Humanity will get a second chance on Mars, but it’s only for those who will conserve rather than exploit this new world.

“Bradbury’s second book . . . a number of short pieces to produce a whole far greater than its parts. . . . In that melancholy classic . . . Bradbury’s prose was correspondingly lyrical and wistful; the book itself unforgettable.” —The Washington Post 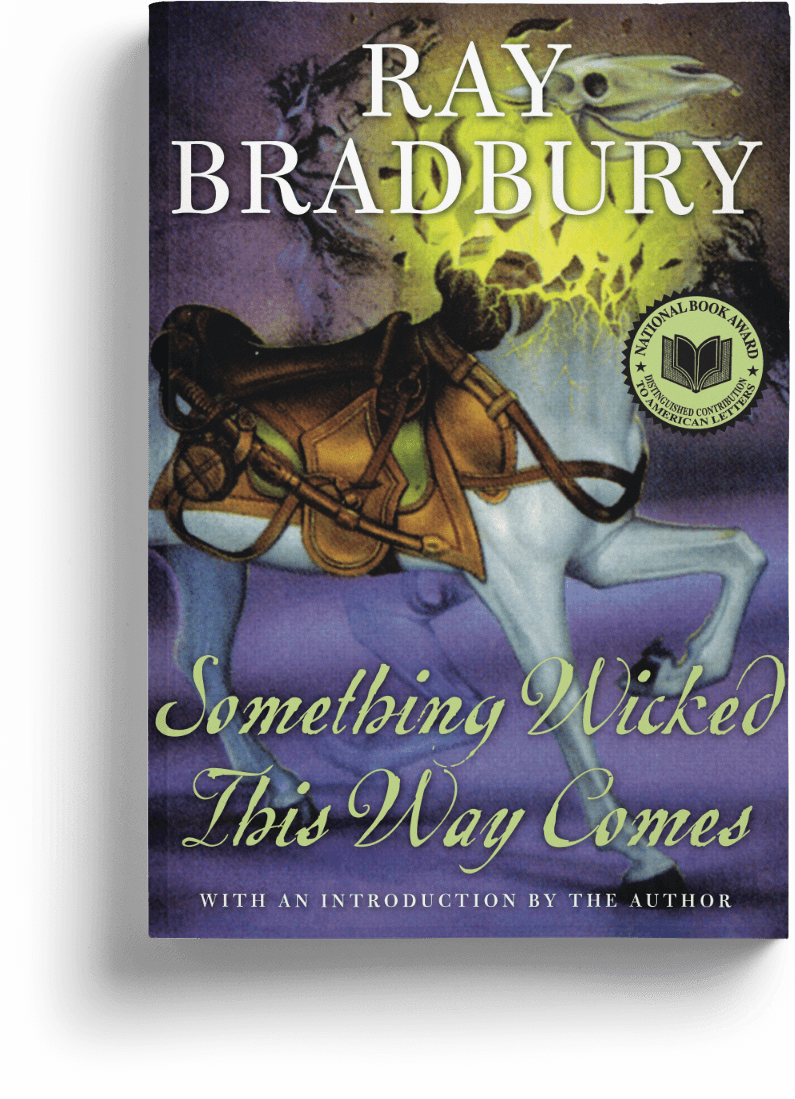 Something Wicked This Way Comes

‘Watching the boys vanish away, Charles Halloway suppressed a sudden urge to run with them, make the pack. He knew what the wind was doing to them, where it was taking them, to all the secret places that were never so secret again in life. Somewhere in him, a shadow turned mournfully over. You had to run with a night like this, so the sadness could not hurt.’

It’s autumn, and a mysterious carnival arrives in Green Town, Illinois. Neighbors Will and Jim, two young boys whose birthdays fall on either side of Halloween, are fascinated that the carnival arrives out of season in the middle of the night, offering rides and sideshows with hidden horrors. One of the proprietors can adjust the carousel to change his age; the other, Mr. Dark, is an illustrated man whose body art has strange powers. When Will’s father realizes the true insidious nature of the carnival, it takes the wits of both father and son to end the carnival’s predatory cycle of dread.

“The allusions (the October country, the autumn people, etc.) as well as the concerns of previous books will be familiar to Bradbury’s readers as once again this conjurer limns a haunted landscape in an allegory of good and evil. Definitely for all admirers.” —Kirkus Review 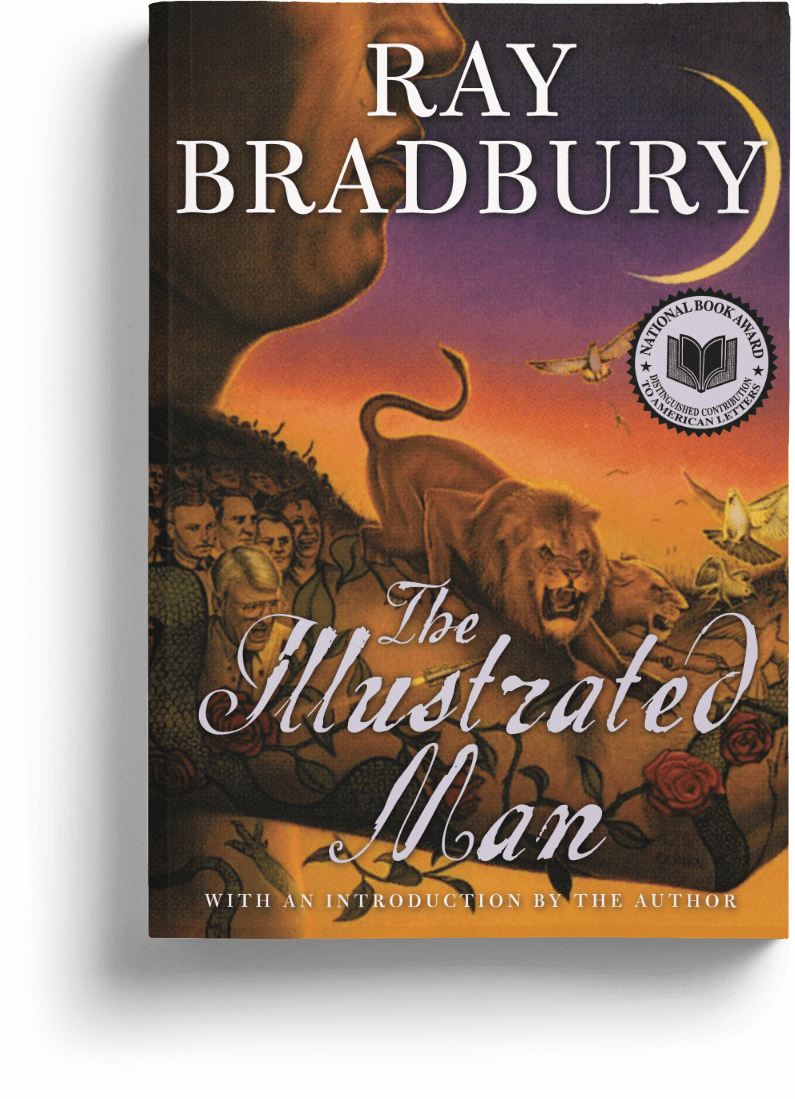 ‘The pictures were moving, each in its turn, each for a brief minute or two. There in the moonlight, with the tiny tinkling thoughts and the distant sea voices, it seemed, each little drama was enacted. Whether it took an hour or three hours for the dramas to finish, it would be hard to say. I only know that I lay fascinated and did not move while the stars wheeled in the sky.’

If you stare long enough at the Illustrated Man, each of his tattoos begins to spin a story—as the night progresses, each one comes alive with equal parts of wonder and terror. Together they represent many of Bradbury’s early and most well-known tales, including stories of Mars, a story of Venus, and glimpses into the far future. What happens when children learn to control their virtual reality nursery? How do you prepare for the last night of the world? Exploring a living canvas with Bradbury as the guide opens out into an exploration of the human condition—that, in itself, is an absolute thrill.

“Deftly plotted, beautifully written, characterized by protagonists who are intensely real. . . . There is no writer quite like Ray Bradbury.” —The New York Times 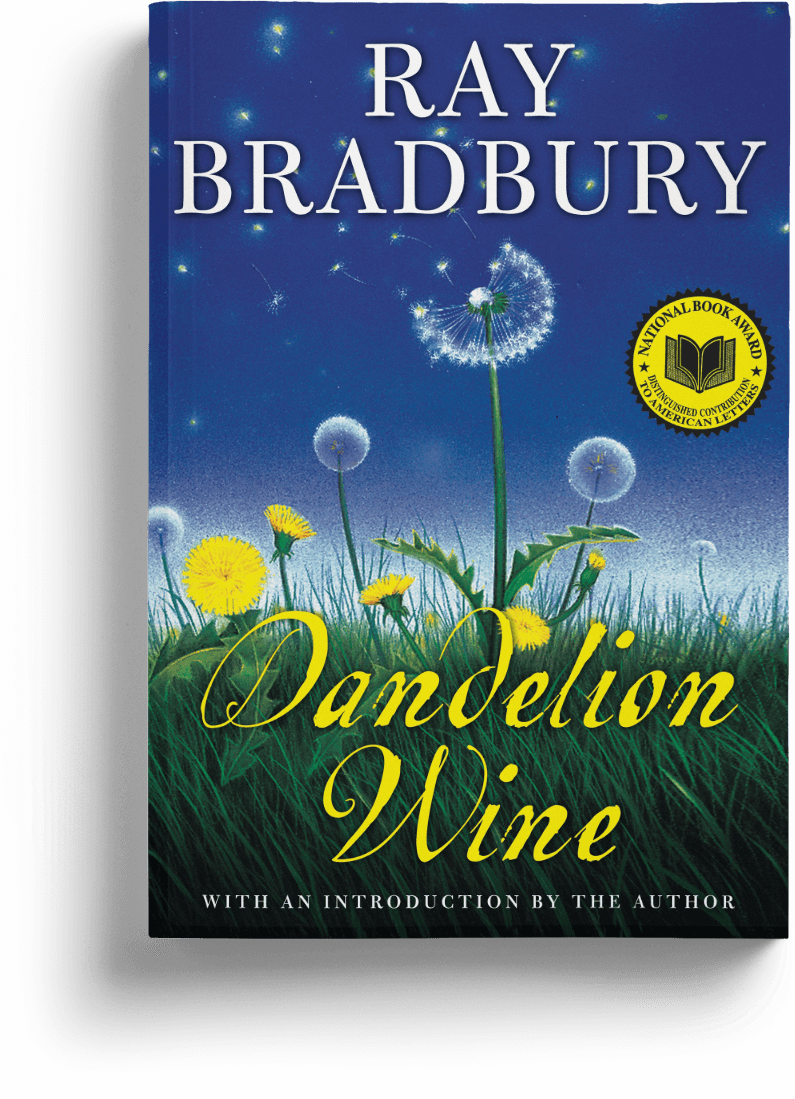 ‘A whole summer ahead to cross off the calendar, day by day. Like the goddess Siva in the travel books, he saw his hands jump everywhere, pluck sour apples, peaches, and midnight plums. He would be clothed in trees and bushes and rivers. He would freeze, gladly, in the hoarfrosted icehouse door.’

Vacation begins with great promise for 12-year-old Douglas Spaulding. It’s 1928, and all the summer joys of Green Town, Illinois, are ready to be savored. As some of the great promises of summer unexpectedly turn into even greater disappointments, the simple joys of childhood start to fade and the passions that lie beyond the world of innocence are gradually revealed: love, sadness, and the struggle to hold onto the past. The ravine that winds its way through the town symbolizes all of these challenges—a special place of adventure as well as misfortune, as temperatures rise.

“Bradbury learned long ago that amidst the joy, there is also evil in the world and in the hearts of men.” —The National Review 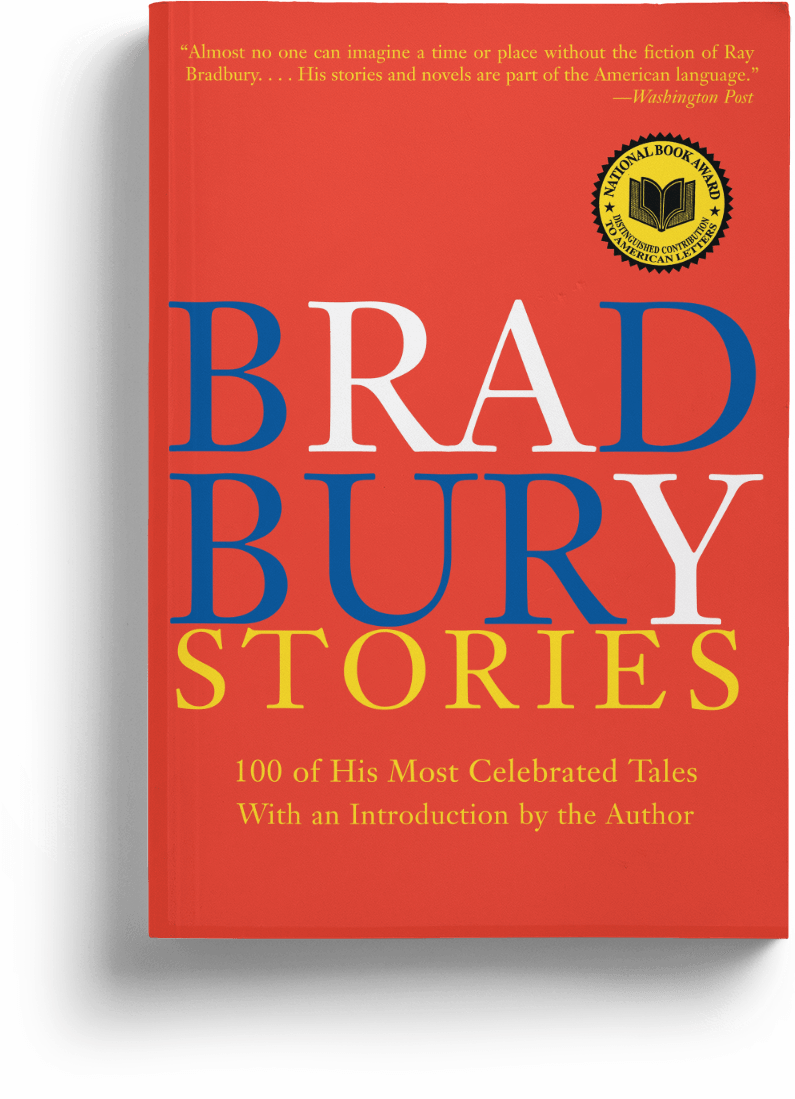 ‘She stood on the edge of the one hundred and thirteen steps that went down the steep hill and then across the bridge seventy yards and up the hills leading to Park Street. And only one lantern to see by. Three minutes from now, she thought, I’ll be putting my key in my house door. Nothing can happen in just one hundred eighty seconds.’

There is magic in the 100 short stories Bradbury chose for this volume: the marvels of interstellar flight, a conspiracy of insects, the early bloom of love in the warmth of August, with characters as colorfully unique as a poker chip hand-painted by a gifted artist, or the night games of a hateful embalmer. Spanning six decades, this is Bradbury at his very best—golden visions of tomorrow, poetic memories of yesterday, dark nightmares, and glorious dreams—a grand literary celebration of a master writer.

“He wrote beautifully enough for adults and clearly enough for kids. He didn’t give a damn if the literary lions accepted him. . . . He wrote in any and every genre, including poetry. He faced the parts of human nature most people don’t see even in their nightmares. . . . He was the shape of things to come.” —TIME 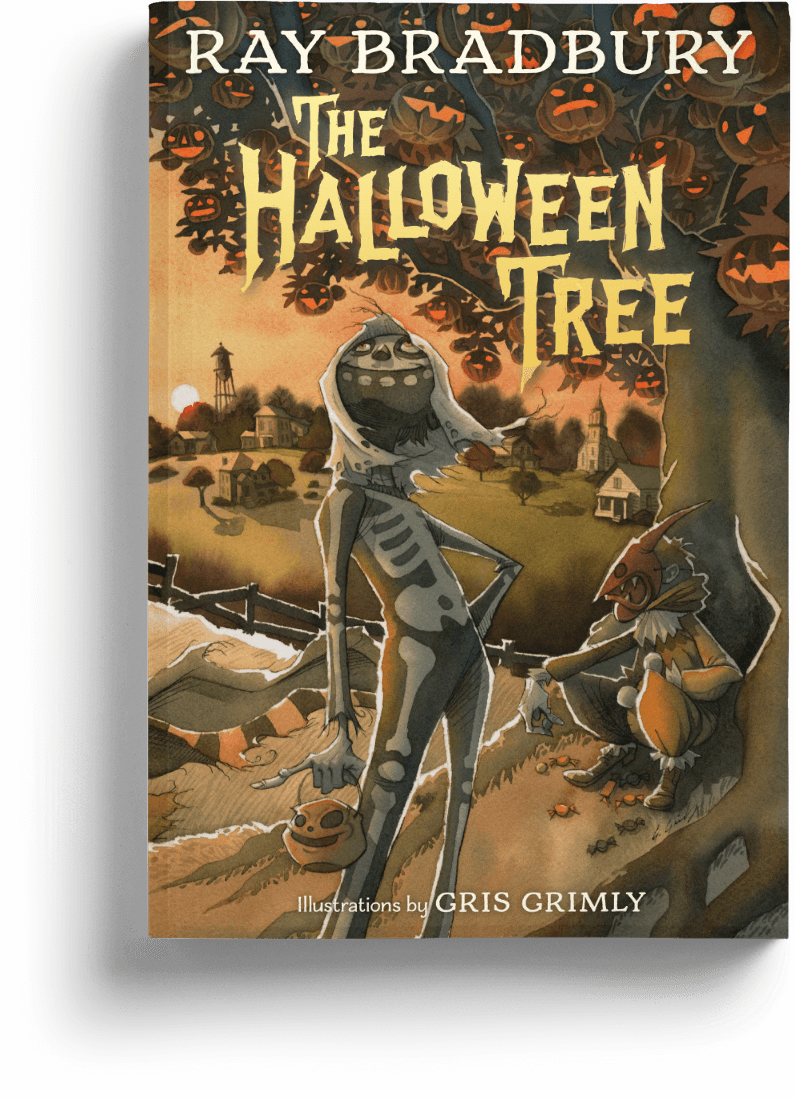 A band of young costumed trick-or-treaters setting out on Halloween find that their leader, Joe Pipkin, is having an emergency appendectomy. They soon discover the Halloween Tree, where Mr. Moundshroud, perhaps a personification of death, is about to harvest Pipkin’s jack-o-lantern. He takes the children with him back in time to learn the histories behind their individual costumes as they seek to help their dear friend. In the process, they just might have a chance to save him.

“Born of an idea shared with cartooning legend Chuck Jones . . . this novella explores the roots of Halloween in a time-and-globe-spanning adventure that’s both fun and still tattooed with Bradbury’s signature shadow.” —WIRED 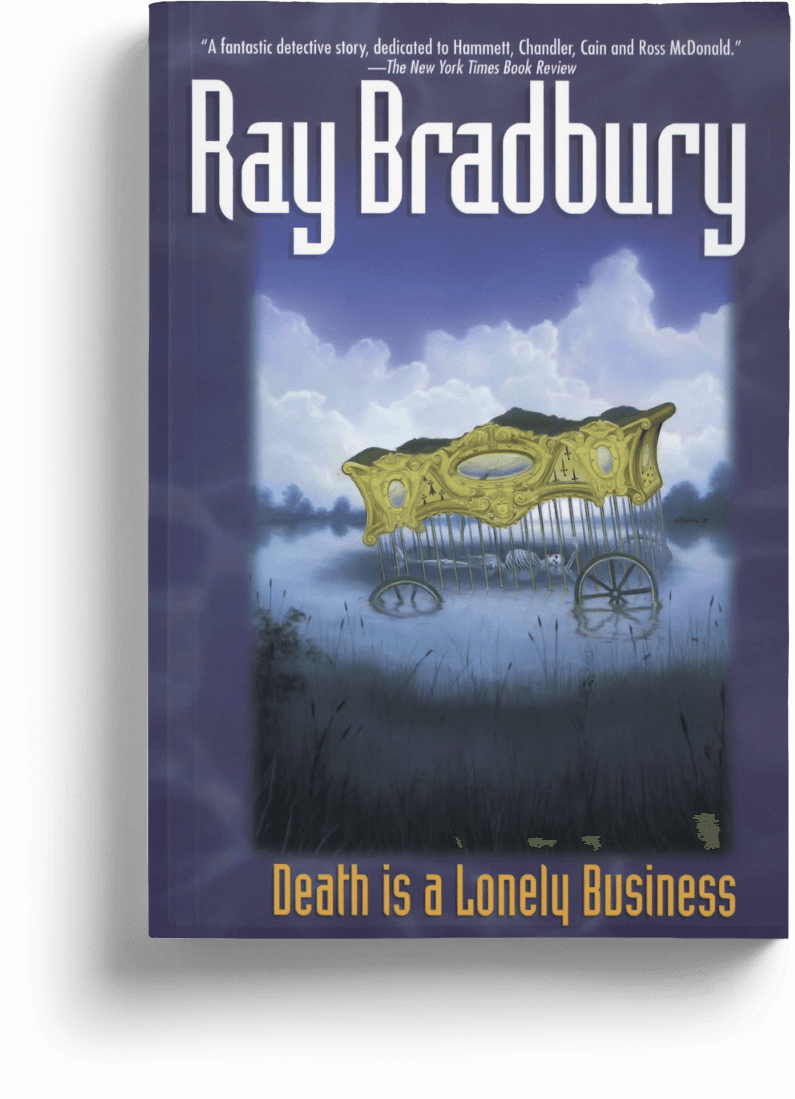 Death Is a Lonely Business

‘I dreaded going back to my apartment bed, which was as empty as an icebox abandoned by the Okies on the way west.

The only thing emptier was my Great American Novelist’s bank account in an old Roman temple bank building on the edge of the sea, about to be washed away in the next recession.’

A killer is roaming the canals of Venice, California, drawing the attention of the unnamed narrator (a struggling young writer), who teams up with a tough but sentimental homicide detective to investigate. As the murders spread to downtown Los Angeles, the narrator realizes that the killer is slaying all of the friends who inspire the characters in his stories. An experiment in autobiography, the novel chronicles the point in Bradbury’s early career when he overcame self-doubt as a writer. 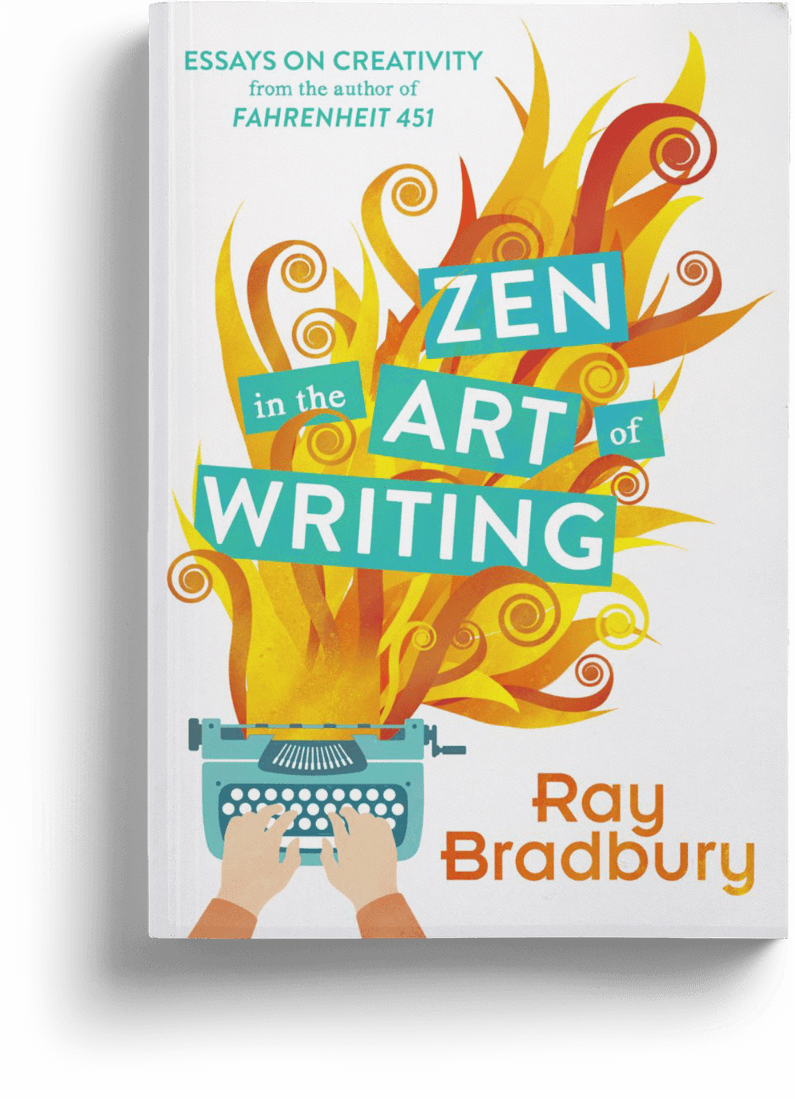 Zen in the Art of Writing

‘When was the last time you dared release a cherished prejudice so it slammed the page like a lightning bolt? What are the best things and the worst things in your life, and when are you going to get around to whispering or shouting them?’

Through nine exuberant essays (the last including poems), Bradbury explains the rewards of his craft, while sharing his writing wisdom, authors he read and revered in his youth, the treats and tricks of word association, and even how he started his best-selling novel Fahrenheit 451. Each essay shares a single compelling theme: writing is a celebration, not a chore. With each page, Bradbury brings to every reader of this collection the passion and the satisfaction discovered through writing—and ways to sustain both.

“Bradbury, all charged up, drunk on life, joyous with writing, puts together nine past essays on writing and creativity and discharges every ounce of zest and gusto in him. . . . Bradbury lovers will find this a Bradbury feast.” —Kirkus Review 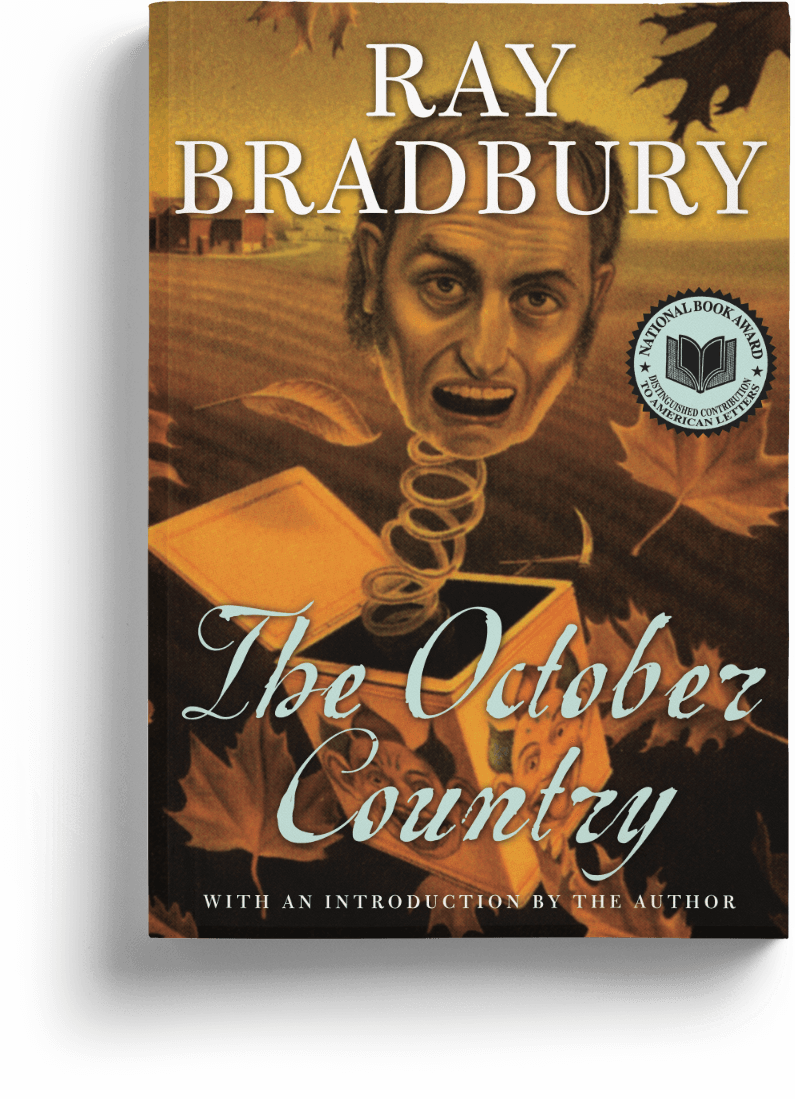 ‘October Country . . . that country where it is always turning late in the year. That country where the hills are fog and the rivers are mist; where noons go quickly, dusks and twilights linger, and midnights stay. . . . That country whose people are autumn people, thinking only autumn thoughts. Whose people passing at night on the empty walks sound like rain. . .  ‘

In 1947, Bradbury’s first collection of stories was published under the title Dark Carnival. Eight years later, he selected fourteen of the original twenty-seven stories, extensively revised them, and added five new ones to make up this tome of the macabre and fantastic. Such favorites as “The Next in Line,” “Skeleton,” “The Small Assassin,” and “Homecoming” are included, as well as introductions to a host of lost souls, meetings with strange emissaries from the graveyard, and many a bizarre circumstance.

“It was his ability to evoke a mood that first endeared Ray Bradbury to the public at large . . . Bradbury’s poetic style. It didn’t matter whether his fantasies made sense: Carried along by Bradbury’s seductive voice, they felt true.” —Los Angeles Times

"You must write every single day of your life... You must lurk in libraries and climb the stacks like ladders to sniff books like perfumes and wear books like hats upon your crazy heads... may you be in love every day for the next 20,000 days. And out of that love, remake a world."
– R.B.